Click on any thumbnail image to view the large version.

View the catalog page for Baptisia.

Hot Diggity Dog! Our Website is open for orders!

"The Promise of a Garden"

We are shipping throughout the fall, weather permitting!

We carefully monitor for inclement weather…MORE

Open for curb-side pick up!

Are you thinking about contacting us? Please view some F…MORE 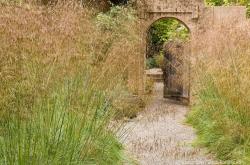 ornamental grasses have a lot of merit, presenting superb versatility and easy-care temperaments plus welcome deer resistance. Equally at ease in either formal or informal settings, they make stellar additions to meadows, naturalized gardens and mixed borders, where they can serve as groundcovers, stand-alone specimens or large-scale sweeps. Ornamental grasses are best positioned so their glimmering inflorescences are backlit by the afternoon sun. Imbued with honey, oatmeal, silver and sable hues to smoky rose and violet shades, the graceful blooms lend a mesmerizing kinetic aspect on breezy days. Aside from sprucing up fresh or dried arrangements with long-lasting loft and textural intrigue, many flowers and seed heads supply much-needed nourishment and nesting materials for birds and other wildlife. Striking color, especially in autumn, can be found among the blade-like foliage of Andropogon, Panicum and Schizachyrium, which splash purple, fiery red and tangerine accents, while some Molinia radiate bright buttery yellows. Please be sure to browse our extensive online selections of ornamental grasses. We hope a handful of our grasses will beckon you to dig them into your own garden.