We’re talking about hardy Geraniums, not the better-known, anything-but-subtle Pelargo­ni­ums. True Geraniums are sturdy yet refined, with 5-petaled flowers borne on dainty stems close to the palmately divided leaves. Their spectrum of colors, from cool to electric, is rivaled only by their ability to create soft mounds and flowing carpets of lush foliage in ordinary garden soil. We plant a succession of varieties to always have some in bloom from spring to fall. Our selections are easily grown: many will rebloom after flowering if lightly trimmed and most die back in winter.

The shade-loving phaeums have been called “mourning widows” for their dark colors, but Mr. Jason Hill wrote that, “their subdued vivacity suggests a widow who has ceased to mourn.” The definitive early bloomer, ‘Lily Lovell’ is endowed with some of the largest flowers in the species, which appear as early as April and always in abundance. The eggplant-colored blossoms are feathered with purple veins above sumptuous light green foliage that everyone likes to touch. Plant with early bulbs under a high canopy. 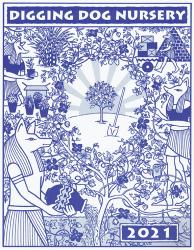