Where would gardening be without Astilbes? A natural for soft-looking vertical statements, it’s distinguished by spectacular feathery plumes rising above finely cut foliage of green and bronze. Its hardiness belies its lovely delicate form. Rewarding you with oodles of cut flowers, these easily grown, unflappable perennials prefer to lounge in cool moisture-retentive soil with sun to dappled shade. 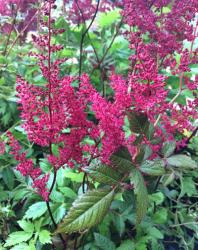 The cultivar name translates to “august light”, alluding to its magnificent feathered scarlet-red plumes that are touted as blooming later than most other arendsii. The erect fluffy flowers ascend on slender stems from a lustrous, bushy fern-like clump of young leaves imbued with rubescent shades plus mature dissected deep greenery. Another spectacular George Arends creation, this Astilbe looks best in sweeps, makes a long-lasting addition to cut arrangements and wards off rabbits as well as deer. 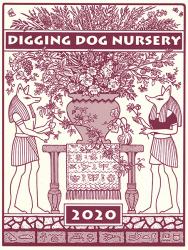